This article has been adapted by AJNS New Media for publication on www.kitchenstories.com.  Click on this link to find that version, which can be read in English, German or Chinese. You'll also discover many more wonderful stories and a beautiful collection of recipes, photos and videos that have been lovingly prepared and provided by the Kitchen Stories team.  Alternatively, check out my article below to enjoy the text in its original form.  Either way, happy reading!

Stew: A Hug in a Bowl 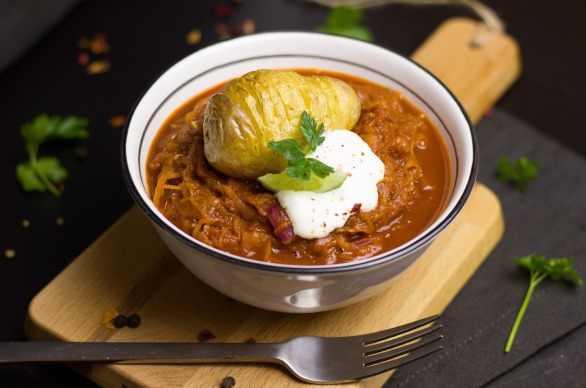 Stews have been made for thousands of years, and most everyone has their own personal connection with at least one recipe.  It’s one of the most traditional family meals out there, and it’s a typical recipe that grandparents and parents teach to children because it’s versatile, tasty, nutritious and easy.  Children grow to associate it with warm memories and home comforts, and so, stew continues to be part of our ever-developing culinary tapestry, moving and adapting with us as we grow and experiment with new cuisines, ingredients and flavours.

Another reason that stew has lived on throughout the centuries is that it’s affordable to make.  Stews can indeed be made with expensive ingredients, but it’s become a firm part of our history and traditions because it can also be made with cheaper ingredients and still taste heavenly, making it an attractive option for everyone.

Although it’s often referred to as peasant food, a good stew can be a rich and decadent dish.  Something magical can happen when simple ingredients that complement one another are allowed to slowly come alive, give the best of themselves and enhance one another’s flavours and textures.  If stew were a dance, it would be a slow, graceful waltz.  But, unlike the waltz, which some would argue is one of the most difficult dances to master due to the strictness regarding the movements, stews are generally forgiving enough in their composition to allow for free-styling and the addition of one’s own personality.

This one-pot wonder has stood the test of time, and it’s experienced a big revival in recent years.  For a long time, stew was made because it was a cheap and easy way to feed a whole family.  The fact that it could be quickly thrown together and then left to simmer gently for long periods also didn’t hurt. It could be said that stews are one of the original convenience foods, as they were, and still are, incredibly convenient in terms of time and energy.

Although stew fell out of fashion as the culinary world opened up and people wanted to try new things, it’s such a basic staple of all cuisines that it could never disappear from our lives completely, and even when it was out of fashion, it never truly lost its charm, because, let’s face it, there’s hardly anything better than a steaming bowl of savoury stew on a cold winter night. Mmm...

And now the 'one-pot' trend has taken the world by storm, and it seems that we are using the wisdom and knowledge of the past to give us the most exquisite, new experiences in the present.  How very wise of us to do that, and how much better off we are for it.

The basic steps in cooking all stews are the same. Here's a basic guide to those steps as well as some tips.

When choosing a pot to cook the stew in, choose something sturdy that has a lid.  If planning to finish your stew in the oven, use an oven-proof pot and lid.  Also, choose a pot that’s big enough to contain all of the ingredients and has some extra room to spare.  We don't want your stew to bubble over the sides of the pot.

Chop the ingredients, and be sure to chop the meat and/or main vegetables to roughly the same size, as it will help them to cook evenly. 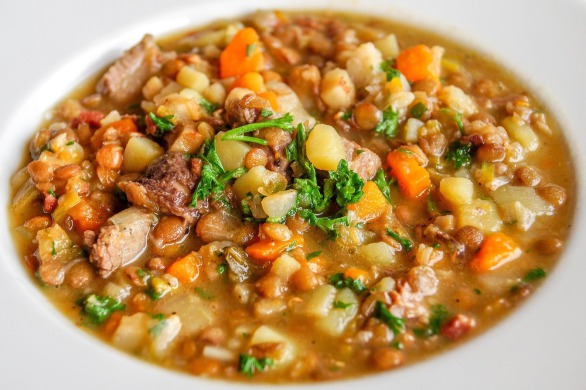 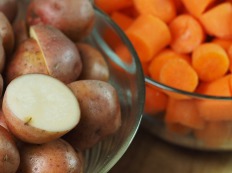 Add the remaining ingredients, i.e. the main (chunky) vegetables, and return the meat to the pot. Give everything a gentle mix so it’s all well combined and warms through.

Add your liquid of choice to deglaze the pan and create the base for the sauce.  Give it a good stir, not forgetting to gently scrape the roasty bits off the bottom.

You can use water, stock, tinned tomatoes, wine, cider, stout or beer, or a combination of a couple of those liquids (e.g. wine and stock) to deglaze and create a base for the sauce.

Gently bring everything to a boil, turn down the heat, cover and let it simmer very gently on the stove or in a pre-heated oven until all of the ingredients are fork tender — when you can slip a sharp knife into the centre of each ingredient and encounter hardly any or no resistance at all.

Check the seasoning before serving.  It's best not to add too much salt at the start.  Season the meat a little before it’s browned and add a good pinch when browning the base vegetables.  Otherwise, leave the final seasoning to the end, just before serving. 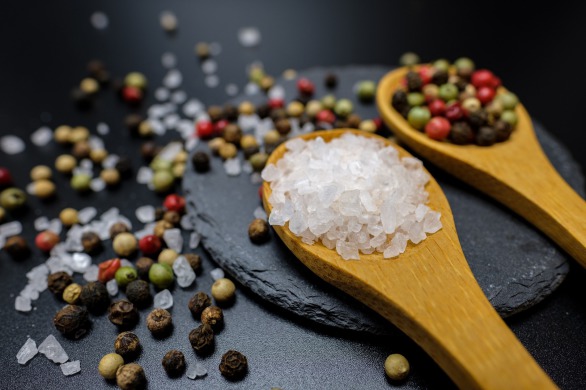 There was a time when a stew without carbohydrates would have been laughed out of the kitchen, but that’s no longer the case.  Low-carb veggies can work just as well, and you can also omit alcohol from the recipe.  Use your veggies, a good stock, good meat, lots of onions, garlic, herbs, and spices to ramp up the flavour.

Before attempting to refrigerate or freeze your stew, allow it to thoroughly cool to room temperature.  It can be stored in the fridge for 3-4 days in an airtight container.

If freezing your stew, use a plastic or foil container that can be properly sealed.  Be sure to leave an inch of free space at the top so that there’s enough room for the water to expand as it freezes.  Please note: It is only safe to freeze meat that hasn’t been frozen before.  The outline here applies only to fresh meat.

When defrosting your stew, it’s best to do in overnight in the fridge.  Remember, the bigger the portion in a container, the longer it will take for the stew to defrost, so allow for extra defrosting time.

Reheat your stew slowly and thoroughly on the stove or in the oven and leave the lid on while it’s reheating so that it doesn’t dry out.  It should be piping hot before being served.  Alternatively, you can reheat it in the microwave on full power.  Stop the microwave every 2 minutes to give the stew a little stir and make sure that it’s reheating evenly.

The difference between stew and soup

Soups and stews can be very similar and contain many of the same components, but there are also differences between them.  Stews tend to be characterised by a slow cooking process and a chunky final texture, whereas soups tend to be cooked in less time and have a lighter, often smoother texture.

Cheap cuts of red meat, e.g. chuck, are tougher to break down, so stewing is the ideal way to cook them; the long, gentle process allows the meat to become meltingly tender.  Beef stew, meatball stew, chicken stew, pork stew, rabbit stew and sausage stew can all be delicious, and for hardcore meat fans, using a combination of different meats will add a whole new dimension to a stew experience — think traditional cassoulet.

When it comes to buying the meat, try to buy it directly from a butcher.  Pre-cut and packaged stewing meat is often made up of different meat cuts, which means they’ll be difficult to cook evenly.   Butchers might cut the meat into cubes and remove excess silver skin and fat for you if asked nicely.

If you prefer to avoid meat and stick with fish and vegetables, fish or fish broth can be a wonderful addition to a stew.  Most white, fleshy fish won't take long to cook, so it's best to add them to the liquid and vegetables at the final stage of cooking.  However, certain types of seafood, e.g. squid, must either be quickly cooked in a frying pan or a griddle pan and then added to the stew once it's cooked, or cooked low and slow for up to an hour in the stew.  (Very fast or very slow cooking of squid is generally the only way to achieve a tender finish.  Something in between will leave you with rubbery squid, which no one really enjoys.) 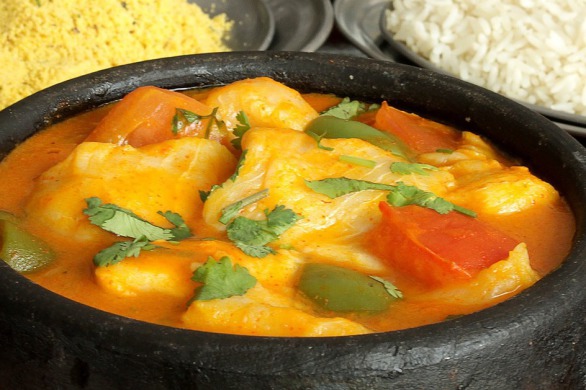 Popular varieties of vegetarian stew include green-bean stew, white-bean stew, cabbage stew, chickpea-aubergine-tomato stew and lentil stew.  Really, the options are endless!  Another benefit of making a vegetarian stew is that due to the lack of meat content, they tend not to need as much cooking.  Therefore, in terms of time, vegetarian stews make getting dinner on the table just that bit easier (as well as cheaper) to manage.

However, if you'd like to use dried beans instead of canned, remember that you'll need to figure in the time to pre-soak them before cooking, and that they'll need roughly an hour in the stew to actually cook through.

The vast array of vegan ingredients makes it all the easier to achieve a tasty stew without compromising personal beliefs or preferences, and it’s now possible to get vegan wines and beers.  Also, vegetable stock, canned tomatoes, water or fruit and vegetable juices can be used instead of meat stock. This makes cooking a vegan stew super easy.

From cassoulet to chowder, stews can be your ticket to a whole new world of deliciousness, and remember, stews can be easily adapted to suit all tastes and preferences.  So, if you're vegetarian, you could replace the meat in a recipe with vegetables, beans, tofu and meat-free liquids; if you're vegan, you can use oil, plant fats and vegan dairy alternatives to replace butter and other dairy products; and if you're on a low-carb diet, simply select vegetables that fit into your diet plan.

Everything is possible when it comes to stew, so don't be afraid to give it a try and make it your own. Be daring and experiment with different herbs, spices, vegetables and meats, and introduce yourself to new flavour profiles and textures.  You never know, they may well end up becoming your new favourites.